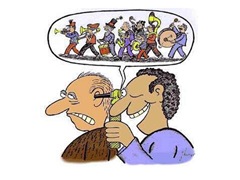 Tinnitus is an aggravating condition of unrelenting ringing in the ears. It affects an estimated 12 million people in the U.S., with as many as 2 million suffers finding it difficult to lead a normal life as a result of the noise. Researchers have been investigating the possibility that tinnitus may be related to a disparity in the brain’s processing of hearing and tactile (touch) nerve impulses. Treatments based on external stimulation of these nerves have shown promise for a return to silence.

What is the Vagus nerve? 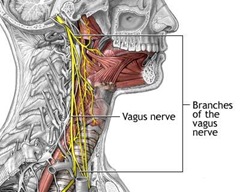 The Vagus nerve (also known as the 10th cranial nerve) supplies parasympathetic information to and from the medulla. It communicates in one way or another with nearly every part of the neck, face and torso including portions of the Glossopharyngeal nerve (throat and swallowing) and the seventh facial nerve which carries impulses of facial sensation.

What is Vagus nerve stimulation (VNS)?

Vagus nerve stimulation has long been used for the treatment of epilepsy and depression, however new studies have shown that it may also reduce symptoms of tinnitus. In VNS, small electrical pulses are delivered to the Vagus nerve via a pulse generator implanted in the neck. During one study conducted by the University Hospital Antwerp, Belgium, tinnitus patients received two and a half hours of VNS every day for 20 days. The electrical stimulation was paired with audible tones that excluded the hearing frequencies where the tinnitus was active. 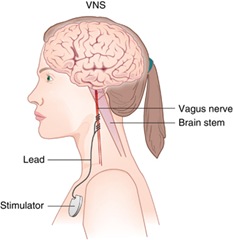 Four of the patients in the study experienced a clinically significant reduction in tinnitus by as much as 26 decibels. Three of these sufferers had a 44% reduction in the impact the illness was having on their daily lives. Dr. Sven Vanneste of the School of Behavioral and Brain Sciences at UT Dallas was optimistic;

“VNS-tone therapy was expected to be safe because it requires less than 1 percent of the VNS approved by the FDA for the treatment of intractable epilepsy and depression. […] In all, four of the ten patients showed relevant decreases on tinnitus questionnaires and audiological measures. The observation that these improvements were stable for more than 2 months after the end of the 1-month therapy is encouraging.”

What’s next for Vagus Nerve Stimulation and tinnitus?

The team is already working on a larger study where they hope to use more convenient implanted pulse generators so subjects need not come to the clinic for treatments. This study is one of many showing that nerve stimulation, when used in conjunction with cognitive and behavioral retraining, may be the golden ticket for new treatments to relieve the symptoms of tinnitus.

Do you suffer from ringing in your ears? Contact our trained team of professionals for help in finding some peace and quiet!